In a changing world, society is shifting from a place of borders, religion, race and gender to a place of higher acceptance and unity. Although our world is slowly getting there, there is still a constant struggle to strive for that acceptance and as we fight to help usher in an understanding, in classrooms the struggle is even more real. In a world of divide, we as teachers, are very strongly faced with the reality of having to address in inequality while creating a place of acceptance in the walls of our classrooms. As youth face their own demons of coming of age, media, societal pressures, and academic pressures, they are also faced with the larger hurdles of personal difference. The question when dealing with youth is not if they will face those hurdles but when and how they will work to overcome them.

As teachers, speaking the truth, giving students multiple perspectives and opening well rounded conversations are some of the weapons we equip ourselves with to begin the battle. But, I felt that a larger space for inclusion was required.

In Canada, we pride ourselves on promoting multiculturalism and openly supporting newcomers to Canada; however, when reflecting on the practices that the schools have in upholding that pride we were falling short. To some degree, assimilation is required in order for families and students to find success in society: knowing and understanding English, having access to education, career options, and support from friends and a community are all a part of the antidote for success. However, are all those elements truly available for newcomers or are the struggles being ignored or assumed fixed? AND do newcomers feel that the culture, language or religion that they came here with is admired and celebrated or do they feel pressure to leave behind an identity that they once new?

I believe that there are many complexities to the questions I felt compelled to ask surrounding this subject and as a new teacher, I felt even more helpless knowing that policy and order above me speak larger hurdles to overcome. But, I knew that there was something within the realm I had control over and that was to begin acting as the bridge between new families, the school, the community and what I could offer as a friendly face.

My solution: create a Cultural Centre within my school.

The vision I had was to create a place where culture could be celebrated, accepted and practiced and where my students would have a safe haven to be entirely who there were without pressures of assimilation. I also wanted it to be a place of global awareness where others could learn about each other, root for each others success, and grow by knowing and loving their differences. I also wanted it to be a place where my students could learn and practice English and where it was ok to fail and try again with guidance. I also wanted a place where families could come to seek community support and know where to find it so that they entirely felt safe within their new community. All of these things were the seeds of where I saw my centre moving.

To my surprise, as I started researching how this was going to happen, many centres like this had not existed… or at least in the cyber world. I knew at that moment my vision had to be mine entirely. After a few months of planning and envisioning and researching my visions became a reality.

On January 11, 2018… my centre was complete. On January 12, 2018 I had a room full of students eager to start using the space- my vision has come true and its healing powers had started. 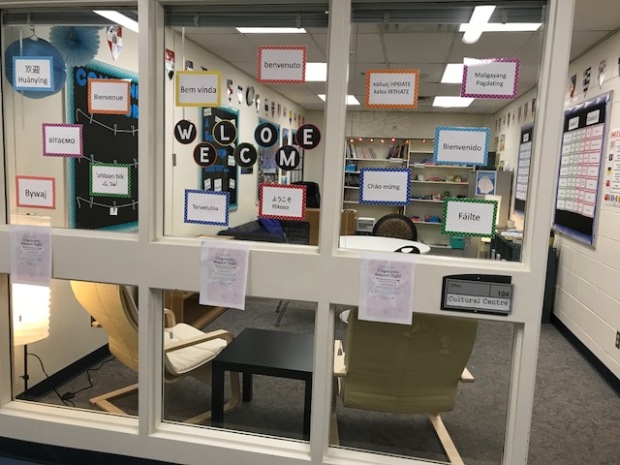 In the first day of its use, I had a grade 5 student read to me a book in her first language- Tagalog. It was the first time in my time as a teacher that I opened up the idea to my students. I told her, today you have two options; you can either read in English or Tagalog. She looked at me in disbelief that I was giving her that option knowing that as she read to me I would not understand one word and she without hesitation said- Tagalog.

As we were reading, she lit up with enthusiasm and explained to me throughout the process what was happening in the story. After reading the story in her language, we read the same story in English and she explained to me the differences between the two stories and read the story in English with little problems. Without the student knowing, I had challenged her giving her a book 2 reading levels higher than where she was reading at in her class- and she crushed it! As a teacher I was glowing knowing that she felt excited sharing with me her culture and language, but also I was thrilled knowing she was learning.

The best part was after we read it she opened up to me about how she was waiting for a space where she could read the long words in a language she knew because when she reads the long words in English they are hard. She also told me that it reminded her of her home country and how the kids she knows living there would love this book because their first goal is having a good future. At lunch, the same little girl brought 2 English speaking students to the centre where she read to them in a language they did not understand because she was so excited to prove to them her individual greatness.

Although it was a lot of work, and the goals of the Cultural Centre are growing and moving it is officially happening. My hope is that this frame work can be used in other schools with similar goals.

If you have questions or want to personally check it out- let me know!

3 thoughts on “Creating a Cultural Centre”